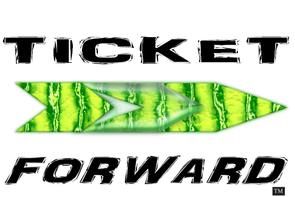 ​We have devised an innovative scheme by which the paying public of all our events will be offered the possibility of paying for a 'TICKET FORWARD', affording the chance to people unemployed, on low income or otherwise excluded, to participate in the Arts.

​We believe TICKET FORWARD to be a first in its field.

We strongly believe in the social and convivial value of live performances and in the regenerating power of Arts inclusion.

From now on, all of our events will offer the  TICKET FORWARD option.

If you are an organizer and would like to join our scheme and/or undergo training to implement it in your company, please contact us using the form on this website.

​​​Infallible London are planning great things in Southwark, both entertaining and theatrical, as well as benefiting the local community.
I recommend having a look at what they are doing.
Sir Patrick Stewart

What the media said:

A new performance space is being launched in Southwark, which will offer a ticketing scheme for disadvantaged people described as the first of its kind in theatre.

The space will be a 75-seat community building called Draper Hall in Elephant and Castle, already used as an events space for tenants of the nearby Draper estate. It will now be used regularly for theatre productions as part of a new venture by producer Stefania Bochicchio.

The initiative, which Bochicchio is undertaking through her production company Infallible London, will also include the new ticketing scheme, called Ticket Forward.

Ticket Forward will allow audiences to pay for additional tickets that will be donated, through charities, to others who may not be able to afford to attend the theatre, including the homeless, unemployed and individuals on low income.

​​An innovative scheme aiming to bring theatre to low and no income audiences is being trialled next week with a production of Richard III, in Elephant and Castle.

The idea is called Ticket Forward and offers regular theatre-goers the chance to purchase additional seats that will then be tallied up and given to local charities focussed on people who feel excluded from society and wouldn’t normally have the opportunity to get culture into their lives. It’s aimed especially at the homeless and unemployed, people on low incomes and victims of domestic violence.

This is the first scheme of its type in the UK, though there have been similar ideas in Continental Europe. Stefania Bochicchio, who has initiated Ticket Forward, compares it to the FairTrade and CrueltyFree initiatives and suggests it could be rolled out in theatres across London and beyond. It has also recently been endorsed by Sir Patrick Stewart.

Bochicchio is currently working with three charities in London to distribute the tickets, which individuals will pick up at the box office like any other audience member, a move Bochicchio said would break down “the last social stumbling block”.

Ticket Forward has been successfully tried and tested for  Infallible's one-woman production of Richard III at Draper Hall  and Joan, Babs & Shelagh too

The idea has been trademarked by Bochicchio, however she said she hoped to work with other theatres and arts organisations that are interested in adopting the scheme.